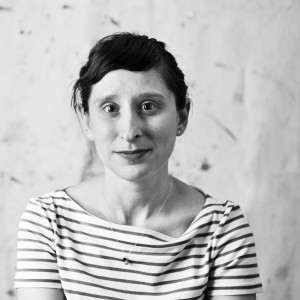 if spoken open hands of those who are watching

will pass on and therefore remains

and order actions left behind      enscripted or

piety of mannered love    to be tied    graced upon

SG: Many of your poems are ungrammatical in a traditional sense. How do you conceive of the relationship between grammar and meaning?

JS: For a writer, I think the use of grammar is similar to the way in which any kind of language or syntax choices are made, in that those choices are used to support the work, whether that is done through a more traditional plot structure, or narrative, or through the breaking up or questioning of more standard scaffoldings. In my own writing, I’m often thinking about the ways that stories are re-told or re-remembered and I feel like my use of grammar or language is done with that kind of re-construction in mind. In a very simple way, though, the choices of structure and language come about unconsciously, and while I revisit and edit the writing, often what comes through in the initial process winds up being supported.

SG: One theory goes that a person’s art isn’t an extension of their known personality but a counterpoint or an exploration beyond what life otherwise offers. I.e. a voluble writer is quiet among people, or vice versa. (There are other theories, of course.) What do you see as being the relationship between the phenomenon of personality and the space of a person’s art?

JS: I don’t know if I’d go so far as to say that one’s art is a counterpoint to their personality—I really think that the relationship between personality and creative output can be radically different from person to person. The most modest person can create radical or even crude works but you might see the same with someone whose personality is just as loud as what they produce, and vice versa, etc. The relationship might have something more to do with the way in which we process things internally. There is clearly a relationship between both our conscious and unconscious thought processes and emotions that comes out in the writing, but the way in which this manifests itself overall in our personalities is a lot more blurred.

SG: Oftentimes the page is the default frame for a poet’s work; a poem, titled, discrete, is understandable on its own terms. Due to the serial nature of your work, is it possible to read one page as a discrete entity? If not, what is the critical mass that must be read for the reader to be able to understand your work as you wish it to be understood?

JS: I almost always work with series—I actually find it very difficult to write a poem that is isolated from a longer work. The choice of working within a series, I believe, has something to do with my interest in storytelling. For me, there’s always some kind of narrative behind my writing, not always a linear one, but a narrative nonetheless, and by writing poems in serials, I’m able to have the space to explore that narrative. In terms of readability, I suppose it depends on what the project is. I’ve written longer projects that are broken up into sections, and in those cases, each section can be read as a solitary piece of writing in one way, and read as part of the longer work in another. I think it would be more difficult to read isolate poems outside of the series, but not impossible, depending on the poem.

SG: While your series aren’t anchored through an explicit narrative, they seem connected to events, places, or texts. What technique do you use in your writing process to create this relational quality, or does this texture develop rather unselfconsciously?

JS: I usually have some idea that I’m working out through the writing. Generally I have certain concrete images and events that then become fractured out into the poems. There’s also almost always a narrative that I have in mind that I’m trying to weave through the work. I think a lot about the process of naming in my writing, how much or how little to give the reader, and then how to avoid lapsing too far into abstractness, which is definitely a struggle.

JS: I read a lot of fiction, and have in the last few years spent a lot of time with Victorian sensation novelists like Wilkie Collins and Anna Katherine Green. Thomas Hardy is one of my favorite writers. I was recently moved and inspired by Roland Barthes’ Mourning Diary. I really admire the work of Susan Howe, Lyn Hejinian, Kazuo Ishiguro, Rosmarie Waldrop, Marguerite Duras, Fanny Howe’s novels, Paul Celan, Zong by M Nourbese Philip, Marcella Durand’s writing, so many others whose names will come to me, I’m sure, as soon as I’ve sent these questions back to you. Right now I’m coming out of a period of having been in school while working full time for the last several years, so as far as the horizon goes, I’m really just looking forward to  having the time and mental space to focus on writing in a way I haven’t had access to in a long while, which in and of itself is pretty exciting.

SG: What are your 5 favorite trees?