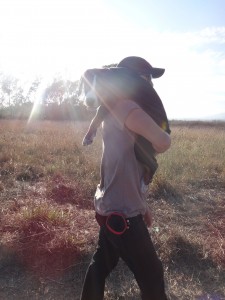 SG: Materiality is one quality more often evident in old analog photography than in the hyperreal ephemerality of the digital print. Though digital, your photos have a rich material—almost mineral—quality to them. Could you explain the techniques you used to create these photos and their rich layered sense of material life?

NM: An integral part of my approach to photography is creating a tactile sense from a two-dimensional space, whether working in digital or analog media. I agree that traditional/analog photography does have a more material, or tactile, feeling. There are some physical factors that contribute to this, such as film grain and color depth, and these can be borrowed or mimicked to a certain extent with digital photography. In this series, I have scanned, at very high resolution, textures created from manual photography processes and layered them into my work, effectively reproducing some of the more esoteric characteristics of analog imagery. This begins the process of subtly tricking the mind into reading the picture as something other than a digital representation of reality. Another way I have achieved this effect is taking prints and manually distressing them with chemicals. Next, because the subjects are presented with a great amount of detail, the viewer is physically drawn closer to the image. The creatures, though apparently fantastic, have the kind of rich depth that the mind automatically associates with reality. When layered with the analog textures, the illusion is nearly complete. So I’m intentionally making choices that trick the brain on a subconscious level, and that’s fun.

NM: My primary media are painting, photography, and film. (By the way, I use the term “film” when talking about movies. Lazy and inaccurate, but habit.) Anyway, I tend to view my work in painting and photography as pursuits of a common goal. I don’t know that I can really define that goal verbally, but in all the images I produce from these “still” media I know I’m guided by a common aesthetic and influence. I’m deeply fascinated by physical textures, and in much of my work I’m trying to recreate or redirect the viewer’s attention to these textures. This probably also applies to a broader definition of texture—emotional, sociological, psychological. I guess if we accept those connotations we can lump my film work in there as well. I think film is primarily a storytelling medium, and though I know some will disagree, I don’t feel that way about photography and painting. For me they have different objectives. But, that being said, in the course of telling a story, I think it can be very interesting to bring in some of the aesthetic that I work on in still media.

As far as the “post media” contemporary art part of the question, I don’t think I can comment on what is or is not happening in contemporary art. As far as my work goes, I don’t feel any pressure to work in a particular medium, so I guess that does make it “post media” in some way. However I don’t feel the need to tear down the boundaries or blur the lines between everything I do. I truly enjoy the simple pleasure of oil paint on canvas; I enjoy the constraints of both analog and digital photography. I won’t be the first one to say it, but constraints often lead to more creative solutions. So I guess I’m saying “post media” is to me nothing more than an incidental concept. Of course everything is informed by everything, but that’s no truer now than it was 100 years ago. It (the “post media” concept) might be present in my work, but it doesn’t play much of a role in my thinking or approach.

SG: Some of your photographs involve layering prints and found objects that could be considered art in their own right. To what extent do you consider the components of a composite work to be discrete art works, or do you think of them merely as raw materials? When archiving your work, do you save the individual unassembled components or only the finished piece?

NM: Certainly some of the components I’ve used could be taken and presented as unique art pieces, but I’m using them as raw materials. They aren’t only raw materials, but, in these collage works, they are parts of a whole. In the end I tend to think of the components of these images more as brushstrokes than as discrete entities.

None of my finished pieces features components that have been created by anyone else. They are all naturally occurring. Yes, we can probably get into the detail of who dried what seahorse and what they were trying to achieve, but in the end it’s really just crap that nature puts out. So I have no qualms appropriating these animals, sticks, rocks, leaves, and organizing them in some fashion and presenting them as art. I have done photographs that strongly resemble found objects, but they are actually all original pieces. That’s a fun way of playing around with the concept of found art and the psychology of photography.

When I’m working I try to maintain individual files for various components mainly from a organizational standpoint, but I certainly do have files that have collapsed onto themselves a number of times and I can no longer pull out individual pieces.

A good friend of mine, Eric Grimes, is an artist who turned me on to the style of image capture used in this series, and he presents his images clean on a black background. So he’s really asking some questions about found objects and art. I think it’s a tricky line to walk, but not so tricky that it needs to be avoided. One image depicts an image torn out of a pornographic magazine that has been folded up and used as an envelope for drugs. To me, this asks a lot of questions about what can be considered art and what is just plain stealing. Is the photographer being wronged? The publisher? Is the drug dealer who folded the photograph, with no lack of effort or attention to detail and design, the artist? What about the person who manufactured the drugs?

SG: As an artist who works with digital media, do you worry about obsolescence or how your work can be rendered in future contexts and platforms?

NM: I try not to, but it certainly crosses my mind. My biggest challenge with digital media is the presentation. I want to control the final output, be it online or in a physical gallery. Added to this are the difficulties of transferring work that has been largely produced digitally into an analog medium. With regards to my own work, I really prefer to have finished prints—physical objects—represent the final manifestation of the art pieces. I guess what I’m saying is the actual physical art object is very important to me. I want it to be bombarded with light, breath, fingerprints. I want it to age with time and to be thrown in a closet or discovered by some miscreant in a dump some day. It’s not that I’m trying to be old-fashioned or anachronistic, I’m just interested in the idea of art as part of the material world, aging along with the rest of us. In that way I guess I’m constantly fighting the idea of digital media. It’s a tool…a means but not an end. 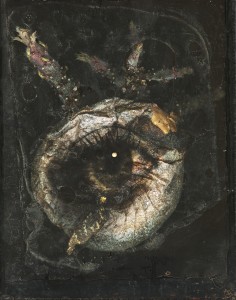 SG: What aesthetic horizons do you look toward when thinking about the future of your art? Whose work do you admire, regardless of media, regardless of how similar it is to your own?

NM: At this point I’m just excited to be creating new work and to still be exploring ideas that I first gained interest in 10 years ago. Some of my next projects will be a little more personal and that’s really just a product of where I’m at in my life. I (happily) plan on moving away from California soon and I have a series of paintings planned as an ode to this strange place. I feel that I’m getting to a place where I have a little more perspective from which to entertain ideas and I’m excited to see what kind of work comes out of that.

One of my favorite artists is the filmmaker Werner Herzog. His absolute fearlessness combined with his unabashed joy of life and art are inspiring in a way that I can’t properly describe. I discovered the photographer Frederick Sommer after I had begun diving into similar territory and was considerably emboldened. I distinctly remember viewing an Antoni Tapies painting made from sand and other media at the Museum of Contemporary Art when I was first beginning my art career and feeling a certain resonance that’s never really gone away. And I’ve always had a special place in my heart for the German and Austrian Expressionists.

SG: Bonus Throwaway Question B/c Matt Can’t Help Himself: Do you prefer the mountains or the oceans? Care to expand?