To Die On The Back Of A Horse

by Kim Cheom Seon
translated from the Korean by Matt Reeck

I died on the back of a galloping horse. As a corpse I fell to ground. This happened in my past lives. I died like this not just once but countless times. I died each time before I was twenty. After years of hard training to become a warrior, the very first time I went into battle I would turn in the enemy’s direction and die. This was because I was very brave. I was the type willing to go through hell and high water. Disregarding the flying arrows and spears, I would rush headlong toward the enemy and die. I died like this each time. I never made it to thirty. My soul never knew what it meant to live past twenty.

In all my lives, this is the first time I’ve lived a long time. In this world, I was born a woman. In my adult life, our country has never faced war. Now I’m over fifty. It’s a miracle. I don’t know how to take care of my body. That’s true when I’m painting too. I should work for a reasonable amount of time and then rest for a reasonable amount. But once I start painting, I wear my body down until I’m ill. After I fall ill, I start crying and crying, wondering why I abuse myself. Only afterwards do I realize that I’m totally exhausted.

If I had just once had the chance to age a little in my previous lives, I’d probably know how to take care of myself. In my next life, I’ll be able to live a balanced life. Like my friends, I’ll go to the gym, run on a treadmill, drink tonics, and do exercises.

I was born again as a human. I became a painter. I paint horses. 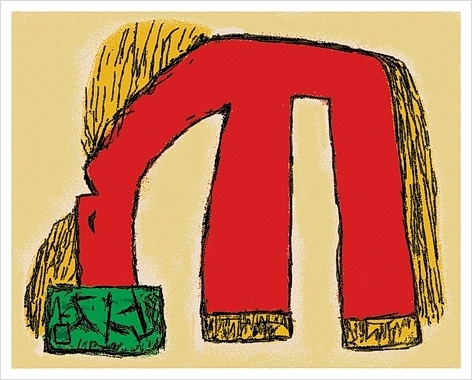 Human life is full of suffering. I experienced this for the first time when I was about ten.

I had to go to the dentist because of a cavity. I was walking down the street biting down on a cotton ball dowsed with anesthetic. I thought, “Wouldn’t it be great not only to have no teeth, but to have no hands or hair as well? Wouldn’t it be great to be able to swim real well, to fly, and to quack like a duck?” I got jealous of ducks: they never have to go to school or do homework; they never have to go to the barber’s to get their hair cut or anything like that. It wasn’t like there were any ducks on the street. I was just imagining them. That day I walked into the dentist’s thinking how ducks have much better dispositions than people whose mouths are crammed full of so many little bones. Deep in the throes of suffering and buried in the dentist’s chair, I suddenly imagined myself transforming into a duck that could fly out of the room and escape. Even after getting home, I thought about what it would be like to be some kind of simple life form. Thinking like this became a habit, and so when I was about to graduate from college I found myself fantasizing about being an earthworm tunneling blindly through the dark earth.

At any rate, I became neither a duck nor an earthworm. I remained a person. For a while UFOs, aliens, and ET were popular. For me they became connected with ducks and earthworms. Do these things know the answers to our unsolvable riddles—like the afterlife, the fourth dimension, the one force behind everything, quarks, and so on?

After becoming an adult, I found peace of mind in painting ducks and horses and other animals in a style much simpler than reality. Still, I was just barely making ends meet.

One day a friend dragged me along to a Buddhist service. A respected monk was already speaking. Crammed in among the others, I listened attentively. The next day this friend led me there again. This time it was a smaller, private gathering. After the lecture, I told the monk that I wanted to become a duck. The monk said that I had to live a human life, that I wasn’t a duck. I realized I really wasn’t a duck. This made me blush, and with quivering shoulders I started to cry. Crying loudly and with a runny nose, I saw what had become of me. I saw myself tearing at my clothes and getting worked up to the point of losing control. I could become neither a duck nor an alien but would have to be a person. I felt claustrophobic. I panicked. I wanted to make myself smaller. I wanted to escape. I felt like a gigantic elephant stuffed inside a box. Since I couldn’t break through the box, I thought that if only I could become a little insect, then …

Being an overly complex machine, being capable of so many intricate, practically useless things—being a human is one big headache. My tears were those of absolute defeat and dejection. I cry because I’m trapped in the prison of this world. I writhe and squirm because trapped in the prison of my human body. And there’s nothing to do about it—I’ll be a prisoner until the day I die.

Kim Cheom-seon was born in 1946 in Kae-seong, now North Korea. She graduated from Ehwa Women’s College and Hong Ik University in Seoul. In her first year of graduate school, her conceptual art was chosen for the 8th Annual Paris Biennial (1973). Soon afterwards, she stopped making conceptual art and began painting. After her first solo show in 1983, she had more than 60 solo shows before her death in 2009. In 1998 she published the first of ten books, Na Kim Cheom Seon (I am Kim Cheom Seon). In 2001, when overuse of her hand made gripping a brush difficult, she taught herself how to draw using a computer mouse. From that point on, much of her art was published in books alongside her art diaries. She experienced ever-increasing fame and notoriety in her last decade for her art and writing, and, just as much, for her eccentricity and individualism. These texts come from her two volumes 10cm Yesul (10cm Art, Maum Sanchek Publishers 2002, 2004).

Matt Reeck has published translations from the Urdu, Hindi, and French. These are his first Korean translations. With Aftab Ahmad, he translated and edited “Bombay Stories” from the “Urdu of Saadat Hasan Manto” (Random House India, 2012, Vintage Classics, 2014). He has won PEN and NEA translations grants for Mushtaq Ahmad Yusufi’s “Mirages of the Mind,” which will be published by Random House India in 2014, and Paigham Afaqui’s “The House,” respectively.

Angela Choi graduated from Hankook University of Foreign Studies in Korea. After coming to the US, she did her second bachelor’s in English Language Art and her Master’s in TESOL (Teaching English to Speakers of Other Languages) at Hunter College, City University of New York. Now, she runs a small private English as a Second Language school in Queens, New York.